"Darkness can never be destroyed. It can only be channeled."

Lord Chernabog is the main antagonist of the entire Kingdom Hearts Unlimited Saga, having been elevated to that role with the removal of Master Xehanort and his clone ilk from the picture to make way for the original Disney Villains who helped inspire them in the first place. Chernabog's role in the series is a combination of Master Xehanort and his original portrayal, only given a much larger part in the story to better relate the eternal struggle between good and evil.

A massive, powerful demon currently trapped within the confines of Bald Mountain, Chernabog believes that darkness and light should exist in perfect balance, and for this reason, he seeks to conquer Kingdom Hearts and recreate the worlds according to his wishes, all to supposedly redeem himself for the actions he made long ago when the universe was almost destroyed because of his arrogance. Through the actions of his heralds, the various undead lich kings and queens who live to do his bidding, Chernabog is ultimately responsible for the series of events that repeatedly threaten the worlds with destruction. He has also brought tragedy to many that have crossed his path, including Taran, Mickey, Eilonwy, Minnie, Ellidyr, Oswald, Wart, Morgause, Anakin, Obi-Wan, Padme, Miklos, and Gwydion.

Of all the incarnations of the original Great Evil, Chernabog is by far one of the most powerful and the one who embodies the true core of the Alpha Being of Darkness. Therefore, he also seeks to reunite all the various shards of his original self that were splintered from him during the War against Heaven, as he believes that only by reassembling himself back to his full strength can he achieve enough power necessary towards completing the other goals in his agenda. These other splintered pieces include Octomus The Master, The Emperor of the Night, The Nightmare King, Lord of Terror Diablo, Lucifer of the Inferno, Chakravartin the Creator, and the Mysterious Stranger. Each of them embodies a major aspect of the Great Evil's original multifaceted personality, with Chernabog, in particular, inheriting the bulk of his memories and his penchant for holding hedonistic raves every opportunity he has to do such.

(His origins as one of the 10 Alpha Beings, the first beings to ever exist in the cosmos, and one of the foremost agents of TOWIAA; pretty much a beat-for-beat retelling of the fall of Lucifer and the Rebellion against Heaven, except including the fact that he fell due to the whispers of Chaos Prima of the Great Void)

Birth of A New Era

The Chain of Memories - Reversed Awakenings

A Year of Misery

An Empire of Dreams

Return of the Keyblade

Chernabog is a gigantic, muscular, humanoid demon. His skin is entirely colored black, and he is so large that Mickey is roughly the size of his eyes. His head sports two curved horns, he has four fangs in his mouth, and his eyes are a glowing yellow. He has enormous, black, bat-like wings, and his wingspan is larger than he is tall.

In human form, Chernabog is bald except for thin eyebrows and a curled, black goatee. His ears are pointed and his eyes are yellow. He has broad, hunched shoulders and a crooked back. He appears overall as a somewhat feeble old man, certainly deceiving given his immense power. He wears a massive black robe with a hood covering part of his face. The robe has silver drawstrings for the hood decorated with a large silver bead hanging from the end and a silver chain ornament adorned with four large cylindrical silver beads that fasten to a loop on either side of the collarbone region.

Chernabog's human form, without the black cloak on

One of Chernabog's various incarnations found throughout the multiverse 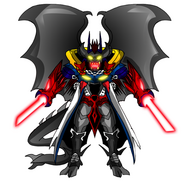 Chernabog as the World of Chaos (initial design)

Chernabog merged with the Horned King as the Beast of Chaos 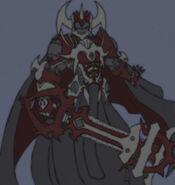 Chernabog in negotiations with Hades atop the peak of Bald Mountain 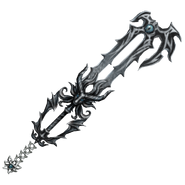 The Demon Blade - the first Keyblade carved in Chernabog's image 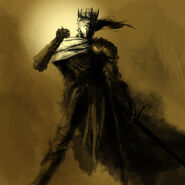 Chernabog's appearance as Morgoth, first Dark Lord of Middle-Earth and master of Sauron
Community content is available under CC-BY-SA unless otherwise noted.
Advertisement